It’s 4am on Wednesday 4th November. Tuesday was a long day, varied, though pretty exhausting in the end. The morning saw an attempt to resolve some client work ahead of a meeting for their creative branding. That was indeed a failed attempt as for whatever reason, I simply couldn’t apply my skills. The daily struggle. From there, I went to a meeting with my studio mate, Emic, hopeful that the result would mean some slight recognition, perhaps, and give our privately ran space, LOFT, a boost moving forward, not that we’d ever count on it. The hustler’s mentality runs deep with us, as it does with most creatives.

Post meeting, we hopped on a bus to Stormont, again, hopeful that we could make some sort of impact to reverse the cuts. This rally, the result of an emergency meeting attempting to find resolutions, ask questions and affect change. A demonstration of solidarity. This vaguely ties to that hustler mentality I spoke of. That resilience that us, in the art sector, have built up over time. For those, not in the know, the arts sector of NORN IRON, as it’s affectionately known, have seen massive budget cuts within the last year. It’s not a new thing and this is most definitely why the outline for the budget has been questioned. As I stood amongst a couple hundred fellow creatives, at the steps of parliament, there was much needed sense of positivity. Yes, you can suppress us by taking our money away, but you can’t knock that resilient attitude. 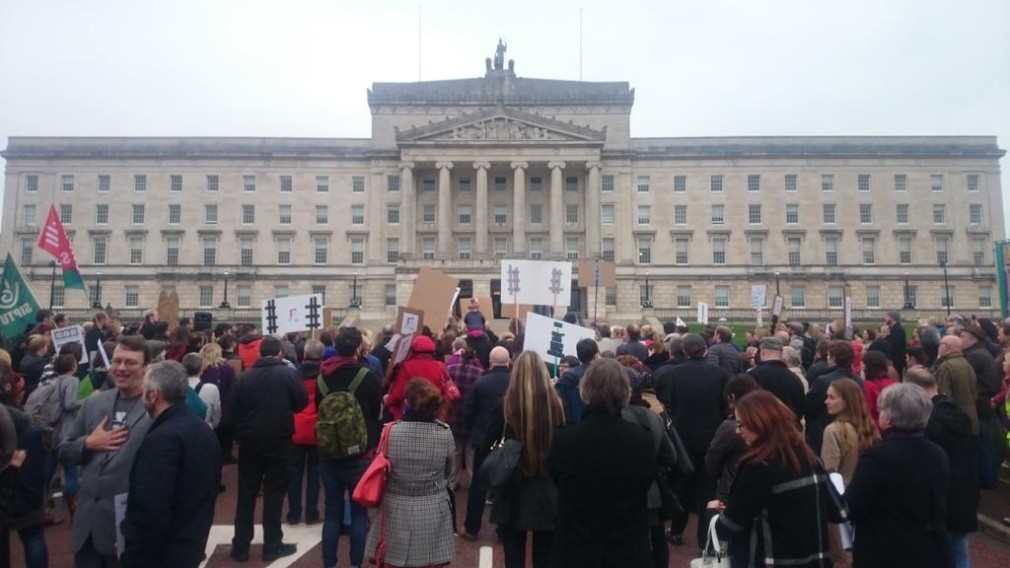 Perhaps the bigger question centres on social rejection or the somewhat esoteric sensibility that the arts is looked upon with, not only here in Belfast, but around the world. It’s bizarre but at times such as these, it’s hard to not feel like a band of outsiders. It’s hard to listen and more so, difficult to trust politicians who seem to posture, appease and ultimately contradict. Support for the arts per capita is 40% lower than anywhere else in the U.K. Fun fact. But what does it really mean? That our government doesn’t value the arts? That in difficult economic times, the arts, that are so often considered recreational or a luxury, are hit first. I think it runs deeper. It’s at school, growing up, where we are first exposed to this notion that it’s a risk to consider art or even think creatively. Parent’s don’t want their kids to follow the “wrong” path. It’s laughable really when you think of all the people who you learn about at school, revered and lauded for their creativity and different way of thinking. Does society really like that? Or is it just a thin veil? Once you liberate yourself and become the artist, the actor, the musician you want to be, suddenly a certain value or lack there of, is placed upon what you do. So it’s back to school and no one wants to take art seriously, again.

“Art washes away from the soul the dust of everyday life.”

There’s a quote from the big man, Pablo Picasso. He probably stole it right? Anyway, this is the crux of the issue. Are the arts vital? Well, of course there are. Why, as a sector, do we have to demonstrate time and time again, the intrinsic value of art, in all its forms? So here’s another quote, from the Arts Minister herself, about a year and a half ago, at the Inquiry into Inclusion in the Arts of Working-class Communities:

“I have often said, and I firmly believe, that without the arts we would have a dull and insipid society. The arts are not a luxury to be enjoyed by an elite few, they should be enjoyed by all who wish to enjoy them regardless of community background, age, gender, disability, race, sexual orientation, political opinion or income level.”

Many would struggle to disagree with anything that’s been said in the above statement, however, as the old idiom goes, actions speak louder than words. At times, there can be a sense of villainisation when it comes to politicians. I’m not saying what’s happened with the cuts over the past few years hasn’t justified that feeling towards the Arts and Culture Minister. But it clearly stems from a lack of integrity. Society would be dull and insipid, yes. Then plough on and phase in a 20% overall cut to that sector throwing out some emotive comments about deprived children. It doesn’t add up. Here’s another quotable:

“I participated in the arts, and I think that participation in the arts is a very subjective exercise. A barrier certainly would have been the money, and we would not have had the money to go to pantomimes or plays, but we had books, the radio and records, and I was lucky to grow up in a family with a very open mind.”

So again, you can’t disagree that participation is subjective or that many families might face difficulties when it comes to money but it has to be said that if there is nothing to go to, then we’re left with a much bigger problem. If the MAC, The Opera House, The Lyric, the plethora of galleries around the city and further afield were to close or reduce their programmes, people would care. Where is the entertainment now? If you want to make it about class, then you’re adding something potentially sensitive and divisive to the mix for no reason. I know plenty of artists who take time out to host workshops for kids, who educate, inspire creative thinking and new perspectives. It’s all been said before. We can only hope that questions are answered, for change, acceptance and more value to be placed upon the sector moving forward.

Leave your thoughts and comments below if you want to weigh in on the situation.